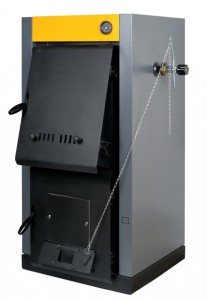 Furnaces have a long history as residential heating systems. After all, the first fireplaces were basically the original furnaces, and ever since people started to construct pipes connected to stoves to distribute heat to other parts of a building, furnaces have been the most common kind of central heating system.

But the boiler has a long history as well. Boilers didn’t become prominent in homes and commercial buildings until much later than furnaces, but they’ve been common since the 19th century. Boilers offer a number of excellent advantages that have kept them around for all those decades: energy-saving performance, clean heat that doesn’t blow around dust, and a toasty warm feeling that people often prefer to the forced-air comfort that comes from a furnace.

Boilers have changed immensely since their first introduction, of course. Perhaps the biggest change of all is that most boilers today don’t actually boil anything, but instead use hydronic power.

Boilers got their name because of how they originally worked. The technology was similar to that used for powerful steam engines in the 19th century. Heat from gas burners raised the temperature of the water inside the tank to the point where the water started to boil. The hot steam from the boiling process is what then passed through the pipes to the terminal points. These high heat levels were necessary for early boilers to deliver sufficient warmth to a building. Until the middle of the 20th century, steam heat boilers like this were the standard.

A number of factors contributed to the change from boilers that boiled and used steam heat to the current hydronic boilers that raise the temperature of water and then circulate it without changing it to steam. The technology of boiler construction improved, allowing a boiler to provide sufficient warmth without actually boiling water to create steam. The modern hydronic boiler has little trouble keeping a house warm in even the coldest temperatures.

Another factor in the change was safety. Steam boilers are potentially dangerous (you’ve probably seen an old movie where villains used boilers as a way to attempt to blow up a building), and the spread of suburban housing and less expensive heating options with fewer safety concerns caused steam boilers to plummet in popularity. Steam boilers were also much more expensive and difficult to repair than newer, safer hydronic boilers. By the end of World War II, steam boilers were becoming relics.

There are still some commercial buildings that rely on steam heat, and they have industrial uses. But even older homes have had their steam heat systems converted over to hydronic systems long ago. One of the few exceptions is in New York City, where steam boilers are still installed in more than 50% of one and two-family homes. If you’re looking to have a boiler installed today, you almost certainly want to go with an efficient, effective, and safe hydronic boiler.

When you have a boiler that requires heater service in Burlington, VT, contact our team. We work with many models of hydronic heating systems, including in-floor radiant systems.