Bad Garbage Disposal Odors: Why They Happen, How to Prevent Them 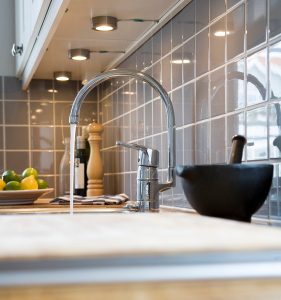 You never want bad odors wafting through your house, but especially not during times when you have guests staying over. And one common source of unpleasant odors in your house is the garbage disposal. Although you should never be placing actual garbage down the garbage disposal (and every plumber wishes these devices had different, less misleading names), you can still end up with a disposal giving off a “garbage” smell.

We’re going to look into some of the reasons why you may have bad odors coming from the garbage disposal, as well as what you can do to prevent this from happening.

This is the most common reason for bad odors, and it’s often the fault of a disposal that isn’t properly grinding or washing down the food.

However, you may simply be putting too much waste down the disposal or not running the disposal for long enough. We don’t recommend pouring grease, fats, or oils down the disposal if you can help it—put it out into another receptacle and then move it to the trash. Whenever you run the disposal, run water down it at the same time (cold water is best to avoid overheating) and continue to let the water run after you’ve shut off the disposal to help wash down the rest of the food particles. Let the disposal run for five seconds after you hear the grinding noises stop; stopping too early may allow particles to become stuck.

Putting lemon peels or vinegar down the garbage can also help deodorize it. (But don’t put ice cubes into the hopper to “sharpen” the blades; there aren’t any sharp blades in the disposal.)

If all the washing and grinding doesn’t get rid of the rotting odor, you might need repairs—or a brand-new disposal.

Another possibility is blocked drain vents on the roof, or blockage in the vent pipes themselves. Leave the repair work to a professional plumber.

Mold and bacteria in the trap

For your plumbing in Burlington, VT, you can rely on Red Rock. We have more than 20 years of history serving the plumbing needs of homes in the area, and we have emergency help available around the clock.